Wilderness and the Central Wasatch National Conservation and Recreation Area

Back To Home
CWNCRA, Mountain Accord, Trails, Watershed March 25, 2021

Wilderness and the Central Wasatch National Conservation and Recreation Area

In 1956, Howard Zahniser, an American environmental activist, introduced the first draft of the Wilderness Act. This Act was signed into law by President Lyndon B. Johnson with an almost unanimous vote and 65 drafts on September 3rd, 1964. It designated 9.1 million acres of publicly held land as Wilderness. The Wilderness Act of 1964 defines wilderness as:

(c) A wilderness, in contrast with those areas where man and his own works dominate the landscape, is hereby recognized as an area where the earth and its community of life are untrammeled by man, where man himself is a visitor who does not remain. An area of wilderness is further defined to mean in this Act as an area of undeveloped Federal land retaining its primeval character and influence, without permanent improvements or human habitation, which is protected and managed so as to preserve its natural conditions and which (1) generally appears to have been affected primarily by the forces of nature, with the imprint of man’s work substantially unnoticeable; (2) has outstanding opportunities for solitude or a primitive and unconfined type of recreation; (3) has at least five thousand acres of land or is of sufficient size as to make practicable its preservation and use in an unimpaired condition; and (4) may also contain ecological, geological, or other features of scientific, educational, scenic, or historical value.

Lands that can be designated as wilderness include National Parks, Forests, Bureau of Land Management lands, and Fish and Wildlife Services lands.

Wilderness and The Central Wasatch National Conservation and Recreation Area

In October 2020, the Commission released the fifth draft of the 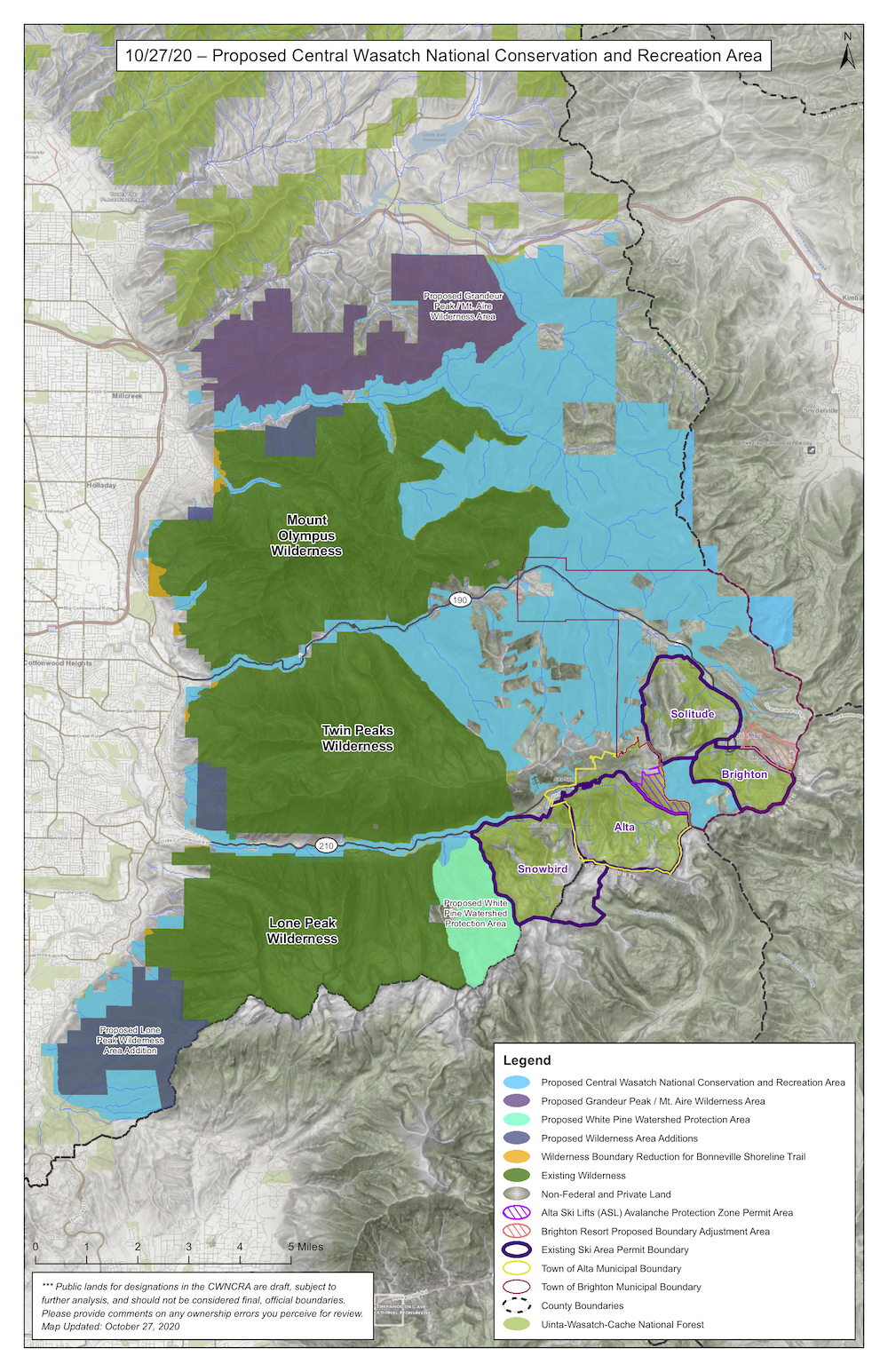 CWNCRA Act and held a 30-day public comment period. In its most current iteration, the CWNCRA is a locally driven and consensus-based bill, that protects watersheds, preserves recreational opportunities for present and future generations, and ensures the enjoyment of the Central Wasatch Mountains in the face of pressures from population growth in the Salt Lake area. The bill includes new land designations, including Wilderness designation in some areas.

The CWNCRA Act would allow for a new designation of the landscapes it encompasses. It is a bill that would direct the U.S. Forest Service to manage the public lands within the designation in a specific way with careful review and public engagement. For example, building roads on public lands (private lands not included) would not be allowed within newly designated national conservation and recreation areas.

As noted earlier, the CWNCRA is an act rooted in the conservation of watersheds and recreational opportunities in the Central Wasatch Mountains. Some of the goals outlined in the Act are:

For more specific information on what the CWNCRA would do, go to this page.