Despite the challenges that the COVID-19 pandemic brought to 2020, the Central Wasatch Commission was able to fund seven short-term projects, finalize three public comment periods, and make progress on the Environmental Dashboard and Mountain Transportation System projects.

In late-March, 2020 the Commission opened a call for project ideas that would implement transportation solutions and protect the ecosystems and watersheds that originate in the Central Wasatch, steward recreational access, and sustain the economic viability of the Cottonwood Canyons. On May 4th, 2020, the Commission’s Board approved funding for seven project proposals that could be implemented in 2020.

The following projects were funded and complete in 2020:

The Central Wasatch Commission also provided $20,000 to Trails Utah in 2020 to complete needed trail maintenance work on the Desolation Trail. That trail work will begin in late spring 2021, weather permitting.

Early in 2020, the Commission set out to further refine and develop the transportation principles outlined in the Mountain Accord Charter 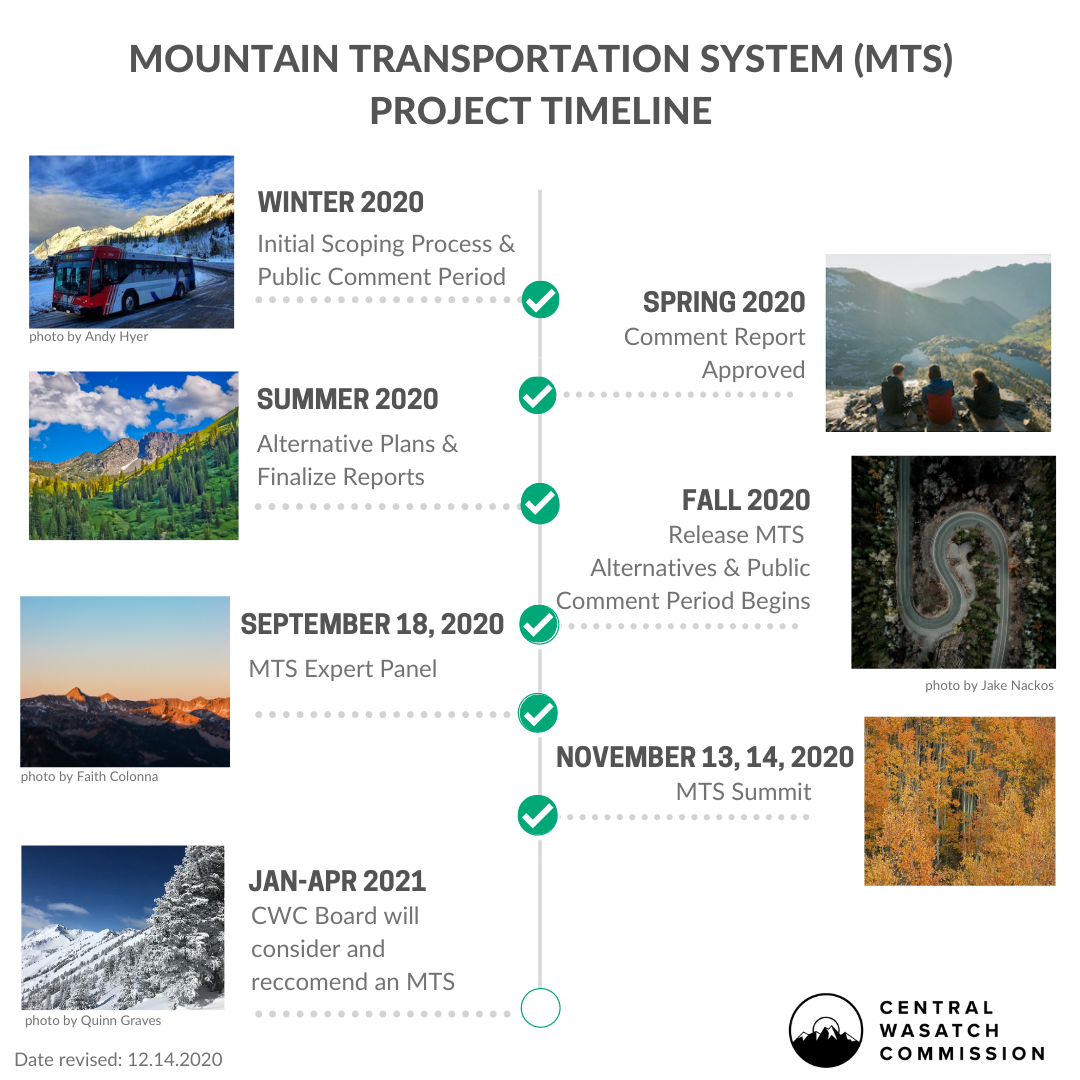 and create a Mountain Transportation System for the Central Wasatch Mountains, including Big and Little Cottonwood Canyons, Parley’s Canyon, and connection to the Wasatch Back.

The CWC held two public comment periods in 2020 and received roughly 600 comments. The first comment period was from February 7th through March 4th, aimed at gathering public input regarding the scope, goals, and attributes of an MTS. On September 18th, the CWC held a virtual

Mountain Transportation System Expert Panel discussing the MTS Report that came out following the first public-comment period in March and released the MTS Draft Alternatives Report and the Design Your Own MTS Survey. Following the panel, another 30-day public comment period was released aimed at gathering public input about the report.

On November 13th and 14th, the CWC hosted the MTS Virtual Summit,

where the board and public discussed the MTS Draft Alternatives report. Finally, in December, the CWC Board had their annual retreat and discussed options for a future MTS for the Central Wasatch. The Board

decided that they will continue to meet bi-monthly to discuss a future plan for an MTS through April 2021.

To read more about the MTS process, click here.

For more information on the Environmental Dashboard, click here.

On October 27, 2020, the most current draft of the CWNCRA was released. This consensus-based bill is aimed at protecting drinking water sources, preserving recreational opportunities for the future, and ensuring enjoyment of the Central Wasatch Mountains in the face of pressures from a growing population.

All the drafts of this legislation reflect proposed changes being considered. Each time a new draft is released, the CWC engages the public for comment and works with stakeholders to attempt to resolve components of the legislation in a consensus-based approach. In 2020, the CWC opened a 30-day public comment period on the draft bill. To read more about the CWNCRA and the comments, click here.

In 2021, the Central Wasatch Commission aims to arrive at a consensus recommendation on a Mountain Transportation System. Following the 2020 Mountain Transportation System process that included two comment periods, two reports examining the Scope, Objectives, and Attributes of a proposed MTS and the draft Alternatives under consideration, an expert panel, and the MTS Summit in November, the Commission lengthened the year-long process until April 2021. Between January and April 20201, the Commission will consider each transportation mode and alternative in more detail during twice-monthly public meetings.

In late 2020, the CWC released a new draft of the CWNCRA legislation and opened a public comment period. CWC staff and Commissioners will continue to refine the draft legislation over the first half of 2021.

The CWC will open a second call for project ideas in late January/early February for the public to respond to. The Short-Term Projects Committee will convene in March to consider projects for funding during the 2021 work season.

Over the course of 2021, progress will continue on the Environmental Dashboard. The project team will develop a prototype of the Dashboard that the public will be invited to view, use, and provide feedback on. The goal is to have the Dashboard functional by the end of 2021. 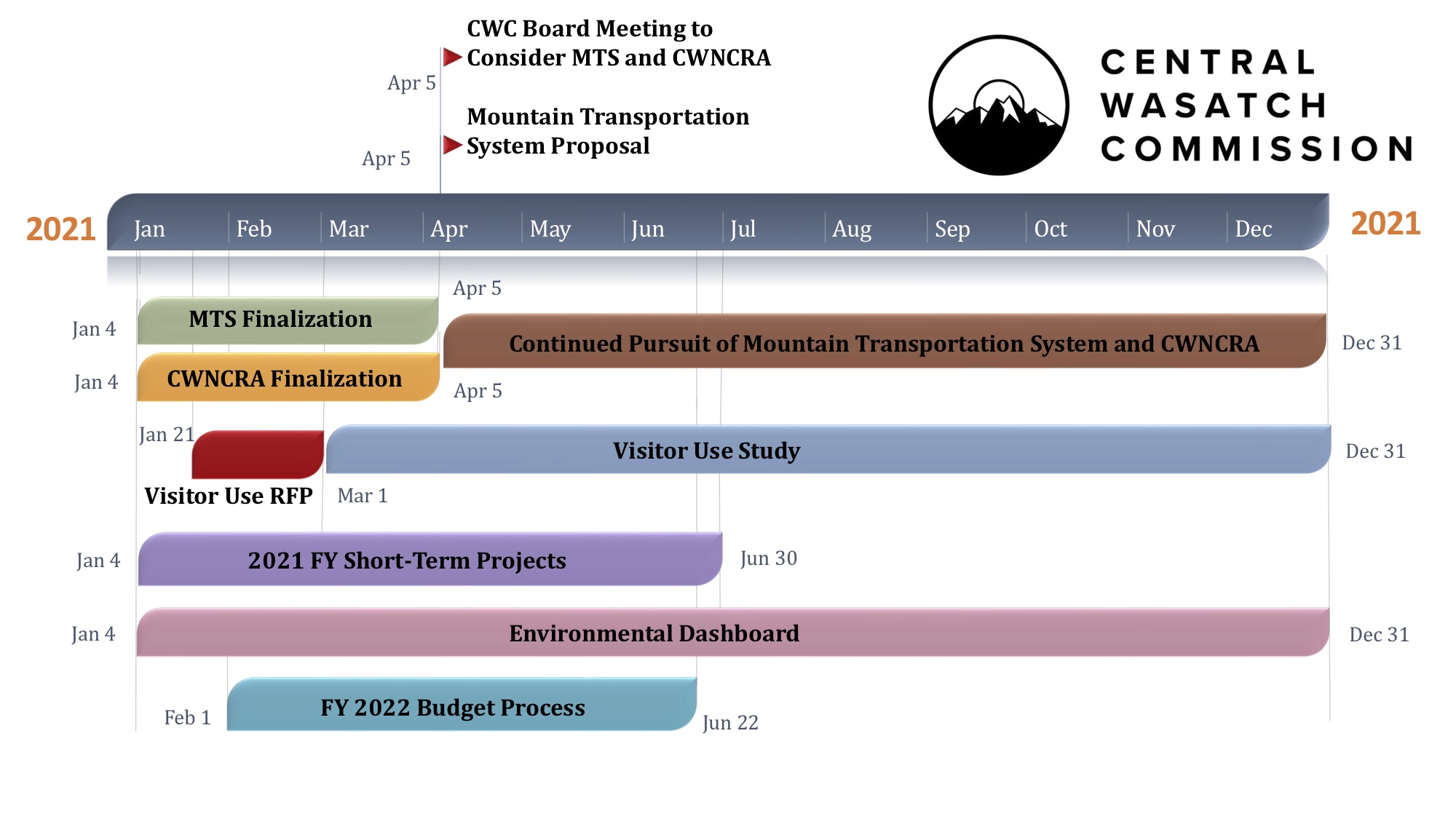